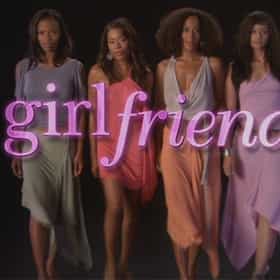 Girlfriends is an American situation comedy that premiered on September 11, 2000, on UPN and aired on UPN's successor network, The CW, before being abruptly cancelled in 2008. The final episode aired on February 11, 2008. When Girlfriends returned in fall 2007 for its eighth season, it became the longest-running live-action sitcom on network television that was on air that fall 2007. It was one of the highest-rated scripted shows on television among African-American adults 18-34, including its spin-off The Game. ... more on Wikipedia

Girlfriends is ranked on...

#21 of 84 People who voted for Girlfriends... Women are 2x more likely to vote for this also upvote Friday Franchise on List of Black Movies, Ranked Best to Worst The Greatest Black Sitcoms of All Time 64.6k VOTES List of the best black sitcoms, past and current. Viewers love these top African-American comedy series for many reasons. Th...
#333 of 482 The Funniest TV Shows of All Time 538.2k VOTES   The funniest TV shows ever range from some of the best TV shows of recent memory to some of the best TV shows of al...
#9 of 41 What to Watch If You Love 'How to Get Away with Murder' 241 VOTES How to Get Away With Murder offered a unique perspective on the traditional legal drama unlike any series that came bef...
#13 of 23 What to Watch If You Love Bridesmaids 805 VOTES While Bridesmaids was a truly unique female-led comedy that was a massive box office hit, there are plen...
#46 of 72 The Best Romantic Comedy TV Shows 70.1k VOTES The very best romantic comedy shows on television are a little bit of funny and a whole lotta love. Popular romantic comedy ...
#7 of 25 The Best 2000s Black TV Shows 1.7k VOTES These are the best 2000s Black TV shows, ranked from best to worst by user votes. From some good 2000s African American TV s...
#7 of 32 The Best Black Sitcoms of the 2000s 4.9k VOTES The 2000s were responsible for several incredibly funny black sitcoms that aired on a variety of networks. Although entirely...

Girlfriends is also found on...