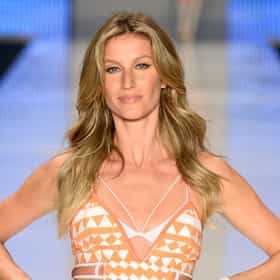 Gisele Caroline Bündchen (Brazilian Portuguese: [ʒiˈzɛli ˈbĩtʃẽ], German: [ˈbʏntçn̩]; born 20 July 1980) is a Brazilian model, actress, and environmentalist. Since 2004, Bündchen has been among the highest-paid models in the world, and as of 2007 was the 16th richest woman in the entertainment industry. In 2012, she placed first on the Forbes top-earning models list. In 2014, she was listed as the 89th Most Powerful Woman in the World by Forbes. In the late 1990s, Bündchen was the first in a wave of Brazilian models to find international success. In 1999, Vogue noted "The Return of the Sexy Model", and she was credited with ending the "heroin ... more on Wikipedia

Gisele Bündchen is ranked on...

Gisele Bündchen is also found on...