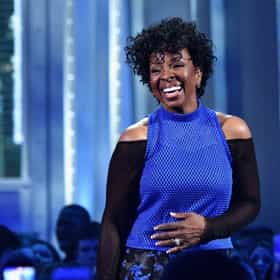 Gladys Maria Knight (born May 28, 1944), known as the "Empress of Soul", is an American singer, songwriter, actress, businesswoman, and author. A seven-time Grammy Award-winner, Knight is known for the hits she recorded during the 1960s, 1970s, and 1980s with her group Gladys Knight & the Pips, which also included her brother Merald "Bubba" Knight and cousins Edward Patten and William Guest. Knight has recorded two number-one Billboard Hot 100 singles ("Midnight Train to Georgia" and "That's What Friends Are For"), eleven number-one R&B singles, and six number-one R&B albums. She has won seven Grammy Awards (four as a solo artist and ... more on Wikipedia

Gladys Knight is ranked on...

#72 of 1,057 The Best Singers of All Time 2.2M VOTES Who are the best singers of all time? That's a tough question to ask. This list includes many of the greatest, most famous v...
#184 of 714 The Best Rock Vocalists 1.2M VOTES The best rock vocalists of all time are the frontmen of our favorite rock bands or those solo artists whose voices are some ...
#66 of 182 The Best Solo Artists Who Used to Front a Band 60.4k VOTES Music groups, no matter how successful they may become, tend to have an expiration date. When a rock band or rap group event...
#717 of 1,452 Celebrity Death Pool 2018 477.7k VOTES Welcome to Celebrity Death Pool 2018! In increasingly uncertain times, there remains one constant in life - we all die. Cele...
Rolling Stone Magazine's 100 Greatest Vocalists of All Time 399.5k VIEWS Rolling Stone's list of the 100 best singers of all-time includes some of the greatest vocalists in the history of recording...
Lifetime Movies Actors and Actresses 15.2k VIEWS Lifetime Movies employs a wide range of actors -most of which you will recognize from more than just TV movies. Lifetime act...
#5 of 129 The Greatest Black Female Singers 44.5k VOTES Making some of the best R&B songs of the past year, they've provided the soundtrack to your first dance, your birth...
All The Clues For The Season 1 Masked Singer Competitors 4.5k VIEWS UPDATED: Check out the Masked Singer Contestants for season 3 contestants here! The Masked Singer on Fox is based on a Kor...
Celebrities Who Turned 75 in 2019 3.7k VIEWS UPDATED: Check out the celebrities turning 75 in 2020! Several famous people celebrated their 75th birthdays in 2019....
Female Celebrities Who Are 5’4" 32.5k VIEWS This list contains examples of female celebs who are 5'4" loosely ranked by fame and popularity. Standing at the averag...
19 Musicians and Singers Who Are Mormon 84.9k VIEWS Several famous vocalists and frontmen are members of the Mormon faith. Some of these Mormon musicians were raised in the chu...
Celebrities Who Have Gambling Problems 225.2k VIEWS This list of celebrities that are or have reportedly been addicted to gambling is loosely ranked by fame and popularity...
Famous Friends Of Aretha Franklin 97 VIEWS Aretha Franklin was a lot of things to a lot of different people. To her fans, she was the Queen of Soul. Over decades, her ...

Gladys Knight is also found on...