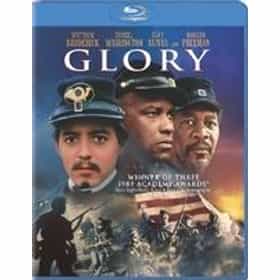 Glory is a 1989 American drama film directed by Edward Zwick and starring Matthew Broderick, Denzel Washington, Cary Elwes and Morgan Freeman. The screenplay was written by Kevin Jarre, based on the personal letters of Colonel Robert Gould Shaw, the novel One Gallant Rush by Peter Burchard, and Lay This Laurel. The film is about the first formal unit of the Union Army to be made up entirely of African-American men, as told from the point of view of Colonel Shaw, its white commanding officer. ... more on Wikipedia

Glory is ranked on...

Glory is also found on...