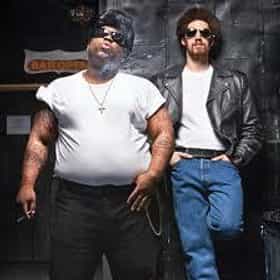 Gnarls Barkley is an American soul duo, composed of singer-songwriter CeeLo Green and producer Danger Mouse. They released their debut studio album, St. Elsewhere, in 2006. It contained their hit single "Crazy", which peaked at number two on the US Hot 100 and topped the UK Singles Chart. It was nominated at the 2007 Grammy Awards for Record of the Year, and was platinum certified for shipping over 1,000,000 records. St. Elsewhere also received a nomination for Album of the Year. The Odd Couple, their second studio album, was scheduled for release in April 2008, but due to a leak of their album over the internet, they decided to release it early. The album in its entirety ... more on Wikipedia

Gnarls Barkley is ranked on...

#817 of 2,187 The Greatest Musical Artists of All Time 13.4M VOTES When VH1 polled fellow artists to name the greatest artists of all time, it seemed like a good idea---but in reality, the li...
#436 of 2,218 People who voted for Gnarls Barkley... are 16x more likely to vote for No Doubt on this list are 7x more likely to vote for The Clash on this list The Best Rock Bands of All Time 3.2M VOTES There are thousands of rock bands that have existed throughout the decades ever since the dawn of rock and roll, but only th...
#15 of 77 The Best Music Side Projects 1.8k VOTES Like everyone else in the workforce, even our favorite rock stars need some time off from seeing his or her bandmates on occ...
#40 of 43 The Best Bands Named After Sports Terminology 463 VOTES Sports and music: it’s a classic combination. Not surprisingly, plenty of musicians are sports fanatics, and they've even na...
#52 of 111 The Best Musical Artists From Georgia 2.9k VOTES Here are the best artists and bands from Georgia. The Peach State is also the birthplace of some of the world's greatest mus...
#23 of 66 The Best Alternative Hip Hop Groups/Artists 5.4k VOTES Alternative hip hop is one of the most underrated rap subgenres. While hip hop and rap music has captured the ears of m...
#167 of 311 The Best Electronic Bands & Artists 14.4k VOTES With the growth of electronic dance music, it's easy to forget that there's a separate genre called electronic music. Not al...
#21 of 152 The Best Musicians Who Performed on SNL In The '00s 395 VOTES From the 9/11 attacks to the writers strike that shortened season 33 to some big cast shakeups mid-decade, Saturday Night Li...
My Lollapalooza 2006 2.7k VIEWS My first "weekend festival" Grant Park Lollapalooza (I attended most of the touring festival ones in the 90s) - a ...

Gnarls Barkley is also found on...