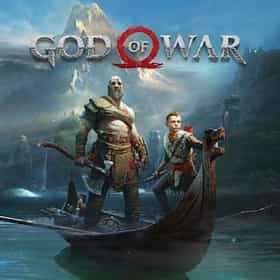 God of War is an action-adventure hack and slash video game developed by Santa Monica Studio and published by Sony Interactive Entertainment (SIE). Released on April 20, 2018, for the PlayStation 4 (PS4), it is the eighth installment in the God of War series, the eighth chronologically, and the sequel to 2010's God of War III. Unlike previous games, which were loosely based on Greek mythology, this installment is rooted in Norse mythology, with the majority of it set in ancient Norway in the realm of Midgard. ... more on Wikipedia

#56 of 145 The Most Popular Video Games Right Now 1.3M VOTES Gamers everywhere, we're ranking the most popular games in 2020. How popular will they be compared to anticipated 2020 video...
#5 of 168 The Best Video Games Of The 2010s, Ranked 114.9k VOTES With so many awesome titles and ground-breaking releases, it’s definitely been a good decade for gamers. While it might be h...
#4 of 123 The Best Playstation 4 Games Released So Far 51.2k VOTES If you've recently purchased a PS4 and are wondering which titles you should pick up immediately, you've come to the ri...
#2 of 27 The Most Popular Adventure Games Out Now 2.2k VOTES Adventurers, unite. We’re ranking the best adventure games right now in 2019. If you're someone who's looking for more than ...
#3 of 40 The Best PlayStation 4 Exclusives, Ranked 191 VOTES It's been a great decade for PlayStation owners. With the PS5 and Xbox Series X gearing up to conquer the console market,&nb...
#62 of 92 Ranker's Bests Of 2018 5k VOTES Here at Ranker, we put the power in your hands to decide what is truly and definitively "the best" of just about e...
#12 of 15 These Enthralling Video Game Stories Could Never Be Filmed 228 VOTES Movies based on video games are notoriously bad. Some doubt it's even possible to make a good video game movie, as Rampage c...
#4 of 101 The Most Popular PS4 Games Right Now 37.7k VOTES Gamers everywhere, we're ranking the most popular PS4 games in 2020. Featuring both classic games and new games, this list o...
#1 of 28 The Best PlayStation 4 Hack and Slash Games 1.1k VOTES Need recommendations for PlayStation 4 hack and slash games? Let's rank the best PS4 hack and slash games, with the hel...
#2 of 41 The Best PS4 Games Of 2018, Ranked 1.3k VOTES Gamers everywhere, we're ranking the best new PlayStation 4 games of 2018. Featuring some of the most popular PS4 games...
#3 of 19 The Best Action-Adventure Games Of 2018, Ranked 411 VOTES Here are the best new action-adventure games of 2018, ranked by gamers everywhere. Featuring sci-fi, fantasy, horror, and op...
#36 of 40 The Best Recent Video Game Soundtracks 186 VOTES There have been some amazing games over the last few years, with equally amazing soundtracks to boot. In fact, the best vide...