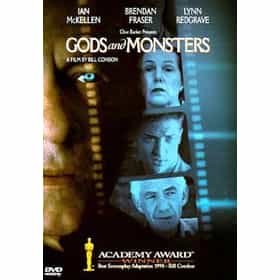 Gods and Monsters is a 1998 British-American drama film that recounts the last days of the life of troubled film director James Whale, whose experience of WWI is a central theme. It stars Ian McKellen as Whale, along with Brendan Fraser, Lynn Redgrave, Lolita Davidovich, and David Dukes. The movie was directed and written by Bill Condon from Christopher Bram's novel Father of Frankenstein. It was executive produced by British horror novelist Clive Barker. The film won the Academy Award for Best Adapted Screenplay, and was nominated for Best Actor in a Leading Role and Best Actress in a Supporting Role. ... more on Wikipedia

Gods and Monsters is ranked on...

Gods and Monsters is also found on...