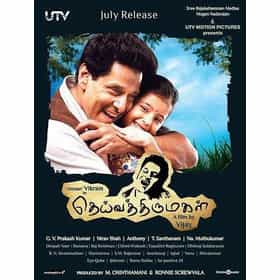 Deiva Thirumagal is a 2011 Indian Tamil drama film written and directed by A. L. Vijay and produced by M. Chinthamani and Ronnie Screwvala that features Vikram in the lead role as a mentally challenged adult with the maturity of a six-year-old boy, while Baby Sarah, Anushka Shetty, Amala Paul and Nassar portray other pivotal roles. The film comprises director Vijay's 'regular' technical crew with G. V. Prakash Kumar as music composer, Nirav Shah as cinematographer and Anthony as editor. Audiography was done by M. R. Rajakrishnan. The film has its basic plot and lead character inspired from the 2001 American film I Am Sam written and directed by Jessie Nelson, and starring Sean Penn as ... more on Wikipedia