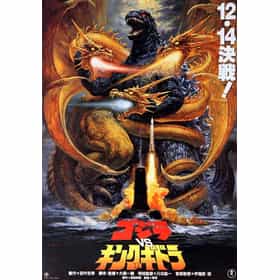 Godzilla vs. King Ghidorah, is a 1991 Japanese science fiction kaiju film produced by Toho Co., Ltd.. Directed by Kazuki Omori, and featuring special effects by Koichi Kawakita, the film starred Anna Nakagawa, Megumi Odaka, and Akiji Kobayashi. The 18th installment of the Godzilla series featured the return of Godzilla's greatest foe, the three-headed King Ghidorah. Tomoyuki Tanaka had originally desired to create new monster opponents for the series, but after the box office disappointment of 1989's Godzilla vs Biollante Tanaka opted to bring back classic foes instead. The film was a box office hit with sequels released on a yearly basis until 1995. It won a Japanese Academy Award for ... more on Wikipedia

Godzilla vs. King Ghidorah is ranked on...

#8 of 112 The Best Japanese Sci-Fi Movies 2.4k VOTES Godzilla is probably the most iconic Japanese Sci-Fi movie character ever. This towering monster is one of the most referenc...
#7 of 46 The Best Giant Monster Movies 6.1k VOTES A list of the best giant monster movies of all time. We believe we thought of them all, but if your favorite giant monster f...
#16 of 24 The Best 90s Monster Movies 1.3k VOTES For all the horror and action nerds, here is a list of the best ‘90s monster movies, ranked by other movie fans on Ranker. T...
#64 of 94 The Best Horror Movies of 1991 879 VOTES List of the best 1991 horror movies, ranked by how many upvotes they've received by other fans of the genre. All types of sc...
#9 of 37 The Best 'Godzilla' Movies Ever, Ranked 240 VOTES There is no doubt that all the Godzilla movies are classics, or at least memorable, but one of them has to be the best of th...

Godzilla vs. King Ghidorah is also found on...