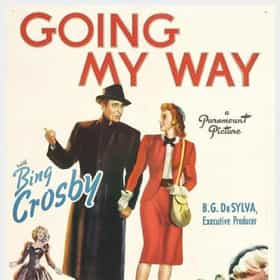 Going My Way is a 1944 American musical comedy-drama film directed by Leo McCarey and starring Bing Crosby and Barry Fitzgerald. Based on a story by Leo McCarey, the film is about a new young priest taking over a parish from an established old veteran. Crosby sings five songs in the film. Going My Way was followed the next year by a sequel, The Bells of St. Mary's. Going My Way was the highest-grossing picture of 1944, and was nominated for 10 Academy Awards, winning 7, including Best Picture. Its success helped to make movie exhibitors choose Crosby as the biggest box-office draw of the year, a record he would hold for the remainder of the 1940s. After World War II, Bing Crosby and ... more on Wikipedia

Going My Way is ranked on...

Going My Way is also found on...