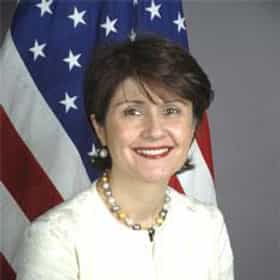 Goli Ameri (Persian: گلی عامری‎; née Goli Yazdi; born September 26, 1956) is an American businesswoman and former diplomat. She is the co-founder of a mobile technology platform called StartitUp, which provides resources to aspiring entrepreneurs. She is the former Under Secretary General for Humanitarian Values and Diplomacy for the International Federation of Red Cross and Red Crescent Societies. She is also the former U.S. Assistant Secretary of State for Educational and Cultural Affairs. She ran for the U.S. House of Representatives as a Republican in 2004, and is a former U.S. Representative to the United Nations. She serves on the board of trustees of the international NGO ... more on Wikipedia

Goli Ameri is also found on...