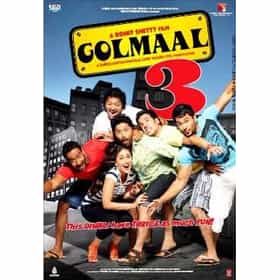 Golmaal 3 is a 2010 Bollywood action comedy film directed by Rohit Shetty and the sequel to the 2008 film Golmaal Returns and the third film in the Golmaal series. The film stars most of the actors from the previous films, including Ajay Devgan, Kareena Kapoor, Arshad Warsi, Tusshar Kapoor and Shreyas Talpade. New additions to the cast include actors Mithun Chakraborty and Kunal Khemu. Principal photography for the film began in March 2010 in Mumbai, Goa and Hyderabad. It was reportedly inspired by Basu Chatterjee's Khatta Meetha, wherein Ashok Kumar and Pearl Padamsee played an old couple marrying with children from their previous marriages, and film's rights were later bought over. ... more on Wikipedia