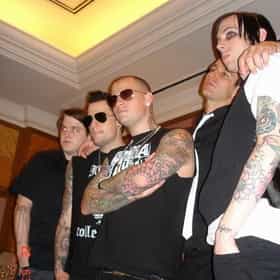 Good Charlotte is an American rock band from Waldorf, Maryland, that formed in 1996. Since 1998, the band's constant members have been vocalist Joel Madden, guitarist and vocalist Benji Madden, bassist Paul Thomas, guitarist and keyboardist Billy Martin, while drummer Dean Butterworth has been a member of the band since 2005. After a four-year-long hiatus, the band announced its comeback on November 3, 2015. The band has released seven studio albums: Good Charlotte (2000), The Young and the Hopeless (2002), The Chronicles of Life and Death (2004), Good Morning Revival (2007), Cardiology (2010),Youth Authority (2016), and Generation Rx (2018), as well as two compilations: Greatest ... more on Wikipedia

Good Charlotte is ranked on...

#872 of 2,187 The Greatest Musical Artists of All Time 13.4M VOTES When VH1 polled fellow artists to name the greatest artists of all time, it seemed like a good idea---but in reality, the li...
#5 of 358 People who voted for Good Charlotte... People Age 30 to 49 are 2x more likely to vote for this The Worst Rock Bands of All Time 718.4k VOTES Here they are: the absolute worst rock bands in history, ranked from the most awful bands to the kind of okay but still pret...
#663 of 2,219 The Best Rock Bands of All Time 3.2M VOTES There are thousands of rock bands that have existed throughout the decades ever since the dawn of rock and roll, but only th...
#219 of 389 The Best Punk Bands Of All Time 626.5k VOTES Punk rock is one of the most popular rock subgenres. The subject of who is the greatest punk band has fueled argument and de...
#26 of 44 The Best Bands Like Panic! at the Disco 1.4k VOTES If you love Panic! at the Disco, you're probably looking for similar bands with the same sound as Brendon Urie and his versa...
#17 of 40 The Best Bands Like Linkin Park 1.3k VOTES Looking for more bands like Linkin Park? The Agoura Hills-based rock band took the nu metal genre to its absolute peak with ...
#3 of 101 The Best Musical Artists From Maryland 892 VOTES Here are the best artists and bands from Maryland. Home to many unique animals and flora as well as beautiful landscapes,&nb...
Superstar Bands That Actually Formed in High School 17.6k VIEWS High school bands are nothing new—jamming in the garage after class is a classic teenage pastime. Only a handful of bands fo...
#22 of 152 The Best Musicians Who Performed on SNL In The '00s 395 VOTES From the 9/11 attacks to the writers strike that shortened season 33 to some big cast shakeups mid-decade, Saturday Night Li...

Good Charlotte is also found on...