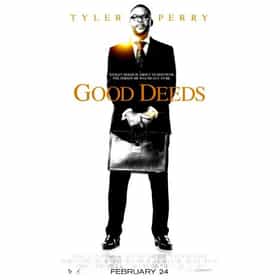 The film opens up with Wesley Deeds (Tyler Perry), the rich entrepreneur of the family-owned Deeds Corporation, getting dressed for work. His fiancée, Natalie (Gabrielle Union) fixes breakfast for him, obsessing over Wesley’s predictable daily routine and life. Before going to work, Wesley makes one unpredictable stop- to pick up his delinquent younger brother Walter (Brian White), who lost his driver’s license after a string of DUIs. Wesley informs Walter they are going to have lunch with their mother, the respectable Wilimena Deeds (Phylicia Rashad). At lunch, tension forms between Walter and Wilimena. ... more on Wikipedia

Good Deeds is ranked on...

Good Deeds is also found on...