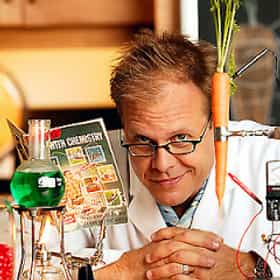 Good Eats is a former television cooking show, created and hosted by Alton Brown, which aired in North America on Food Network Cooking Channel. Likened to television science educators Mr. Wizard and Bill Nye, Brown explores the science and technique behind the cooking, the history of different foods, and the advantages of different kinds of cooking equipment. The show tends to focus on familiar dishes that can easily be made at home, and also features segments on choosing the right appliances, and getting the most out of inexpensive, multi-purpose tools. Each episode of Good Eats has a distinct theme, which is typically an ingredient or a certain cooking technique, but may also be a ... more on Wikipedia

Good Eats is ranked on...

#38 of 85 The Worst TV Theme Songs 25.9k VOTES List of worst TV theme songs ever, ranked by the people who had to listen to them before every episode. One of the mo...
#1 of 98 The Best Cooking TV Shows of All Time 16.1k VOTES Here are the very best cooking shows on television, ranked from best to worst. Including shows from the Food Channel, B...
#3 of 138 People who voted for Good Eats... also upvote James Bond Franchise on Every James Bond Movie, Ranked Best to Worst The Best Food Network TV Shows 12.1k VOTES List of popular Food Network shows, ranked from best to worst. This list of the top current and cancelled Food Network TV se...