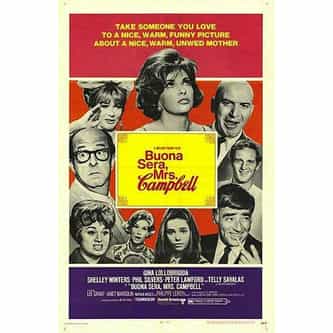 Buona Sera, Mrs. Campbell is a 1968 American comedy film starring Gina Lollobrigida and directed by Melvin Frank, who co-wrote the original screenplay with Denis Norden and Sheldon Keller. The United Artists release was filmed at the Cinecittà Studios in Rome. It served as the basis for the unsuccessful 1979 stage musical Carmelina and the plot of the enormously successful stage musical Mamma Mia! and its 2008 movie adaptation. ... more on Wikipedia