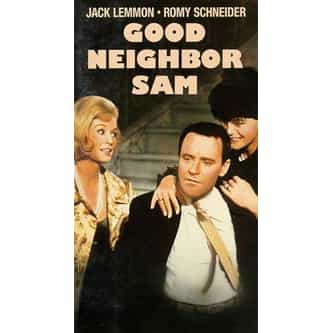 Good Neighbor Sam is a 1964 American comedy film co-written and directed by David Swift and starring Jack Lemmon, Romy Schneider, Dorothy Provine and Michael Connors. It was based on the novel by Jack Finney. The screenplay was the motion picture debut of James Fritzell and Everett Greenbaum, who had written many American television situation comedies including Mr. Peepers. Greenbaum also created the mobile sculpture featured in the film. ... more on Wikipedia

Good Neighbor Sam IS LISTED ON