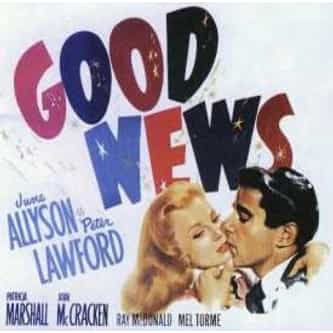 Good News is a 1947 American MGM musical film based on the 1927 stage production of the same name. It starred June Allyson, Peter Lawford, Mel Tormé, and Joan McCracken. The screenplay by Betty Comden and Adolph Green was directed by Charles Walters in Technicolor. Two additional songs were written for the film: "The French Lesson" and "Pass That Peace Pipe". Good News was the second adaption of the stage musical, after the 1930 film Good News. The 1947 film was ... more on Wikipedia

Good News IS LISTED ON