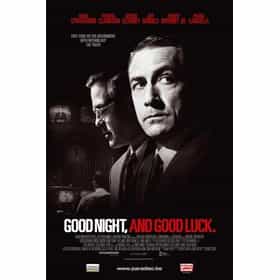 Good Night, and Good Luck. is a 2005 American drama film directed by George Clooney and starring David Strathairn, Clooney, Robert Downey, Jr., Patricia Clarkson and Jeff Daniels. The movie was written by Clooney and Grant Heslov and portrays the conflict between veteran radio and television journalist Edward R. Murrow and U.S. Senator Joseph McCarthy of Wisconsin, especially relating to the anti-Communist Senator's actions with the Senate Permanent Subcommittee on Investigations. The movie, although released in black and white, was filmed on color film stock but on a greyscale set, and was color corrected to black and white during post-production. It focuses on the theme of media ... more on Wikipedia

Good Night, and Good Luck is ranked on...

Good Night, and Good Luck is also found on...