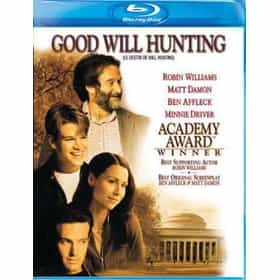 Good Will Hunting is a 1997 American drama film directed by Gus Van Sant, and starring Matt Damon, Robin Williams, Ben Affleck, Minnie Driver and Stellan Skarsgård. Written by Affleck and Damon, and with Damon in the title role, the film follows 20-year-old South Boston laborer Will Hunting, an unrecognized genius who, as part of a deferred prosecution agreement after assaulting a police officer, becomes a patient of a therapist and studies advanced mathematics with a renowned professor. Through his therapy sessions, Will re-evaluates his relationships with his best friend, his girlfriend and himself, facing the significant task of thinking about his future. The film received ... more on Wikipedia

Good Will Hunting is ranked on...

Good Will Hunting is also found on...