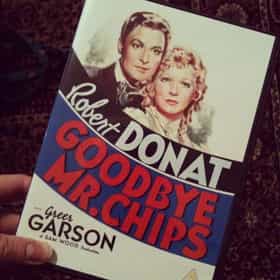 Goodbye, Mr. Chips is a 1939 British romantic drama film directed by Sam Wood and starring Robert Donat and Greer Garson. Based on the 1934 novel Goodbye, Mr. Chips by James Hilton, the film is about an aged school teacher and former headmaster of a boarding school who recalls his career and his personal life over the decades. Produced for the British division of MGM at Denham Studios, Goodbye, Mr. Chips was voted the 72nd greatest British film ever in the BFI Top 100 British films poll. ... more on Wikipedia

Goodbye, Mr. Chips is ranked on...

#859 of 1,699 The Most Rewatchable Movies 3.3M VOTES There are some movies that I always stop at and watch if I see them on TV or I can put in the DVD player and watch when I'm ...
#315 of 710 The Best Movies Roger Ebert Gave Four Stars 160.3k VOTES List of movies Roger Ebert gave four stars, ranked best to eh. This is NOT a complete list of all of Roger Ebert's four star...
#86 of 198 The Biggest Tearjerker Movies of All Time 36.6k VOTES This is a CrowdRanked list of the saddest movies of all time: tearjerkers. Does just reading the names of these sad movies m...
#11 of 49 The Best Good Movies 1k VOTES Have you seen any good movies lately? Good films are what make the world go 'round. This is a list of movies that have the w...
#15 of 199 The Best Metro-Goldwyn-Mayer Movies List 4.4k VOTES List of Metro-Goldwyn-Mayer movies, ranked best to worst, including trailers, genres, and release dates. Metro-Goldwyn-Mayer...
#6 of 244 The Best Movies of 1939 5k VOTES List of the best movies of 1939, with movie trailers when available. These top movies of 1939 are listed by popularity, so t...
#3 of 26 The Best Paul Henreid Movies 333 VOTES List of the best Paul Henreid movies, ranked best to worst with movie trailers when available. Paul Henreid's highest grossi...