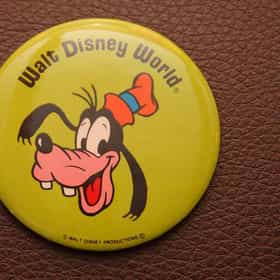 Goofy is a funny-animal cartoon character created in 1932 at Walt Disney Productions. Goofy is a tall, anthropomorphic dog who typically wears a turtle neck and vest, with pants, shoes, white gloves, and a tall hat originally designed as a rumpled fedora. Goofy is a close friend of Mickey Mouse and Donald Duck and is one of Disney's most recognizable characters. He is normally characterized as extremely clumsy and somewhat dimwitted, yet this interpretation is not always definitive; occasionally Goofy is shown as intuitive, and clever, albeit in his own unique, eccentric way. Goofy debuted in animated cartoons, starting in 1932 with Mickey's Revue as Dippy Dawg, who is older than Goofy ... more on Wikipedia

Goofy is ranked on...

#14 of 303 The Greatest Cartoon Characters in TV History 810.9k VOTES Throughout the annals of TV history, cartoon stars have shone brightly, bringing joy to children and adults alike....
#13 of 174 The Best To Worst Kingdom Hearts Characters 25.2k VOTES Kingdom Hearts is a magical action-adventure RPG gaming series combining the worlds of Disney and Final Fantasy, b...
#10 of 134 The Greatest Talking Animals in TV History 48.6k VOTES List of the greatest talking animals in television history, as ranked by television critics, historians, and fans. Throughou...
#15 of 21 21 Non-Human Cartoon Characters Reimagined As Humans 153.5k VOTES Almost every single cartoon out there hosts some sort of creature with a personality. Sometimes, like in the case ...
#24 of 30 This Artist Turns Disney Characters Into Pokemon Evolutions 66.4k VOTES Ry Spirit is an Australian artist who is active on Instagram and DeviantArt. While he's known for a wide range of incredible...
#5 of 81 The Greatest Dogs in Cartoons and Comics 28.6k VOTES Just like in real life, cartoon dogs are often Man’s best friend. In animation, they can be used as comedic sidekick charact...
#6 of 26 Disney Animated Characters Who Secretly Appear In Other Disney Movies 2.6k VOTES Disney loves to hide things within their movies for fans to find, some impossible to miss and others requiring you to l...
#10 of 23 Here's What 23 Of Your Favorite Cartoon Characters Will Look Like In Their Old Age 64.9k VOTES Feast your eyes on cartoon characters like you've never wanted to see them before! Re-imagined as really, really old, this l...
#9 of 30 The Greatest Single Father Characters in Film 992 VOTES The relationship between a father and his child is a powerful bond – even if the father and child in question happen to be f...
#4 of 130 The Greatest Dog Characters of All Time 18.1k VOTES For this poll we've created a list of the greatest dogs of all time, featuring dogs you know from movies, television, video ...
#5 of 27 The Best Disney Names to Give a Dog 195 VOTES Disney has produced some of the most beloved movies of all time. From Snow White and the Seven Dwarfs to Froz...

Goofy is also found on...