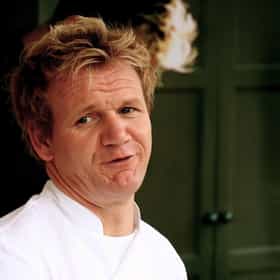 Gordon James Ramsay (born 8 November 1966) is a British chef, restaurateur, writer, television personality and food critic. He was born in Johnstone, Scotland, and raised in Stratford-upon-Avon, England. His restaurants have been awarded 16 Michelin stars in total and currently hold a total of seven. His signature restaurant, Restaurant Gordon Ramsay in Chelsea, London, has held three Michelin stars since 2001. Appearing on the British television miniseries Boiling Point in 1998, by 2004 Ramsay had become one of the best-known and most influential chefs in the UK.As a reality television personality, Ramsay is known for his fiery temper, strict demeanour, and frequent use of expletives. ... more on Wikipedia

Gordon Ramsay is ranked on...

#58 of 88 The Best Reality Show Judges 56.4k VOTES Reality show competitions and judges are two things that go together like peas and carrots. Without a judge, it's nearly imp...
#284 of 530 People who voted for Gordon Ramsay... People over 50 are 2x more likely to vote for this Annoying Celebrities Who Should Just Go Away Already 1.2M VOTES The most annoying celebrities, ranked by entertainment fans themselves. These annoying celebs are obnoxious, overexposed, ...
#36 of 87 The Worst TV Talent Show Judges Of All Time 7.6k VOTES Judges are the key part of talent shows, it's their knowledge and expertise that decides which competitors have the skills t...
#1 of 18 The Best Professional Chefs with YouTube Channels 560 VOTES While you may think these big names in food only grace major television networks with their presence, there are a surprising...
Celebrity Babies Who Were Born In 2019 6.3k VIEWS UPDATE: Check out the celebrity babies who were born in 2020! Some of the sweetest and most exciting celebrity gossip is h...
#5 of 48 The Best Celebrity Vlogs On YouTube 11.3k VOTES From Hollywood to YouTube, here are the best celebrities who have YouTube channels. Unlike the most popular Y...
Famous People Named Gordon 12.5k VIEWS If your name is Gordon, then you're in some great company. Here's our list of the most famous people named Gordon, including...
#3 of 44 The Best Cooking and Recipe YouTubers 3.8k VOTES Need help in the kitchen? Here are the best cooking YouTube channels. If you're looking to up your cooking game, check out t...
The Highest Paid Celebrities of 2013 20.1k VIEWS The highest paid celebrities of 2013 range from the top stars in music, movies, television, news and sports, but all have on...
20 Celebrities Who Played Soccer In High School 45.3k VIEWS Celebrities who played soccer in high school all once shared a passion for what Americans call soccer and what others call f...
Famous Men With At Least 4 Kids 152k VIEWS This list features information on celebrities with four kids or more. If you’ve ever wondered, “Which celebrity has the most...
The Highest-Paid Celebrities of 2015 25.6k VIEWS It's no surprise to anyone that celebrities are wealthy, and that some celebrities are wealthier than others. But a certain ...
Celebrities Turning 50 in 2016 127.1k VIEWS For normal people, turning 50 means grudgingly entering the next decade of middle age. It means grown children, or a loomi...
#1 of 19 The Best Episodes of Bon Appétit's Back-To-Back Chef 37 VOTES Bon Appétit's Back to Back Chef is a brilliant way to waste time on YouTube. In each episode a professional...

Gordon Ramsay is also found on...