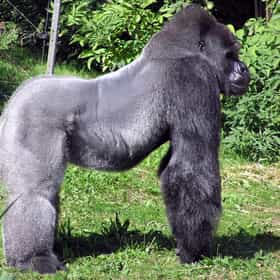 Gorillas are ground-dwelling, predominantly herbivorous apes that inhabit the forests of central Sub-Saharan Africa. The genus Gorilla is divided into two species: the eastern gorillas and the western gorillas (both critically endangered), and either four or five subspecies. They are the largest living primates. The DNA of gorillas is highly similar to that of humans, from 95 to 99% depending on what is included, and they are the next closest living relatives to humans after the chimpanzees and bonobos. Gorillas' natural habitats cover tropical or subtropical forests in Sub-Saharan Africa. Although their range covers a small percentage of Sub-Saharan Africa, gorillas cover a wide range ... more on Wikipedia

Gorilla is ranked on...

#46 of 84 People who voted for Gorilla... also upvote Rocky Franchise on The Best Sports Movies also upvote Indiana Jones Franchise on The Best Steven Spielberg Movies The Scariest Animals in the World 1.8M VOTES We're all more scared of one thing than another. Maybe it's the idea of being mauled by a Grizzly or having spiders crawl in...
#80 of 120 People who voted for Gorilla... also upvote Harry Potter Franchise on The Most Rewatchable Movies Animals with the Cutest Babies 72.3k VOTES Adorable baby animals: Everyone loves them. But which young animals are actually the cutest? Until now, science has had no w...
#29 of 41 The Most Adorable Animal Parenting Moments 73.2k VOTES The cutest moments in animal parenting history involve mothers and fathers and their littly bitty mini-mes, out in the world...
#110 of 214 The World's Most Beautiful Animals 160.2k VOTES What are the world's most beautiful animals? This list includes some of the most stunning, exotic, and truly gorgeous animal...
#17 of 20 Weird Animal Feet You Have To See To Believe 3k VOTES From the blue-footed booby's undeniably vibrant pedicure to the terrifying, horror villain-esque toes of an aye-aye, these a...
#8 of 12 12 Super Creepy Animal Ultrasounds You Can't Unsee 1.5k VOTES There's no denying that ultrasounds are creepy. Sure, there's an adorable baby in there, but that doesn't make the image of ...
38 Incredible Albino (and Leucistic) Animals 4.5M VIEWS Albino animals have a genetic mutation that causes an absence of tyrosinase in their pigment cells, which means they don't...
10 Incredible Animals That Scientists Initally Didn’t Believe Were Real 22.5k VIEWS The scientific community is not infallible, and sometimes they get stuff just plain wrong. And that doesn't just include sci...
Animals Who Have Same Sex Partners 28k VIEWS Animals, they’re just like us! Kinda. Animals with same sex partners and homosexual behaviors of various kinds can be found ...
Dads Of The Animal Kingdom Who Are Truly The Best 1.8k VIEWS Being a dad is one of the toughest jobs in the world, and sometimes one of the most under-appreciated. The amount of work an...
The Strongest Animals in the World 473.6k VIEWS Animals of all shapes and sizes have different kinds of strengths. Deciding which animals are the strongest really depends...
Humor In Animals: The Species That Can Laugh 25k VIEWS Anyone who has owned a pet understands that animals can have complex emotional lives. They feel sorrow, guilt, joy, and...