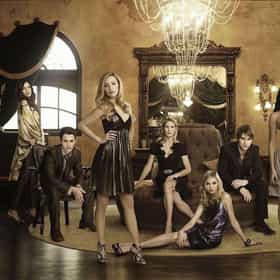 Gossip Girl is an American teen drama television series based on the book series of the same name written by Cecily von Ziegesar. The series, created by Josh Schwartz and Stephanie Savage, originally ran on The CW for six seasons from September 19, 2007 to December 17, 2012. Narrated by the omniscient blogger "Gossip Girl", voiced by Kristen Bell, the series revolves around the lives of privileged young adults on Manhattan's Upper East Side in New York City. The series begins with the return of Upper East Side It girl Serena van der Woodsen from a mysterious stay at a boarding school in Cornwall, Connecticut. Blair Waldorf, whom creators describe as the queen at the center of ... more on Wikipedia

The O.C.
The Most Ridiculous Storylines 'Gossip Girl' Writers Ever Came Up With 225 votes Gossip Girl, one of the most habit-forming shows of the 2000s (and it lives on via Netflix), features storylines that revolv...
The Best Gossip Girl Episodes 5.6k votes List of the best Gossip Girl episodes, as determined by voters like you. With all the amazing episodes of the show that exis...
The Cast Of 'Gossip Girl': Where Are They Now? 4.3k views Good morning, Upper East Siders. It’s been more than a decade since Gossip Girl premiered and took the world by storm. Focus...
How the Cast of Gossip Girl Aged from the First to Last Season 4.5k votes Gossip Girl ran on the CW for six seasons from 2007 to 2012. It let all of us in on the scandals, romance, bitter rivalrie...
What to Watch If You Love Gossip Girl 1.2k votes If you’re wondering what to watch after Gossip Girl, don't worry – there are plenty of great TV shows and movies with simila...
The Best Seasons of 'Gossip Girl' 3.3k votes For this poll we're ranking the best seasons of Gossip Girl, with the help of your votes. One of the hottest TV show casts, ...

Gossip Girl is ranked on...

Gossip Girl is also found on...