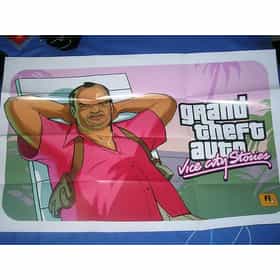 Grand Theft Auto: Vice City is an open world action-adventure video game developed by Rockstar North and published by Rockstar Games. It was released on 27 October 2002 for the PlayStation 2 console, on 12 May 2003 for Microsoft Windows, and on 31 October 2003 for the Xbox console. It is the sixth title in the Grand Theft Auto series, and the first main entry since 2001's Grand Theft Auto III. Grand Theft Auto: Vice City is played from a third-person perspective in an open world environment, allowing the player to interact with the game world at their leisure. The game is set in 1986 within the fictional city of Vice City, which is heavily based on Miami and draws inspiration from ... more on Wikipedia