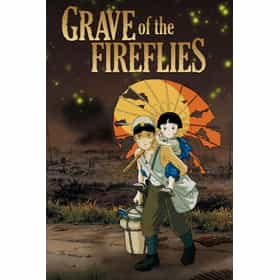 Grave of the Fireflies is a 1988 Japanese animated drama film written and directed by Isao Takahata and animated by Studio Ghibli. It is based on the 1967 semi-autobiographical novel Grave of the Fireflies by Akiyuki Nosaka. The film stars Tsutomu Tatsumi, Ayano Shiraishi, Yoshiko Shinohara and Akemi Yamaguchi. Set in the city of Kobe, Japan, the film tells the story of two siblings, Seita and Setsuko, and their desperate struggle to survive during the final months of WWII. Grave of the Fireflies received acclaim from film critics. ... more on Wikipedia

Grave of the Fireflies is ranked on...

#213 of 374 The 50+ Best War Movies Ever Made, Ranked 520.6k VOTES From classics like Saving Private Ryan to newer entries like Dunkirk and 1917, this list ranks the best movies about war, ba...
#117 of 598 The Best Animated Films Ever 974.2k VOTES The best animated movies of all time are an assortment of animated movies that rank among the best movies ever made. Wh...
#287 of 336 'Old' Movies Every Young Person Needs To Watch In Their Lifetime 1M VOTES If you're a younger millennial, you've probably heard your older friends and coworkers say things like "Hey, you g...
#156 of 292 The Top Tearjerker Movies That Make Men Cry 217.6k VOTES Some classic, well-loved films are classified tearjerkers, but would all sad, depressing movies make the manliest men cry? N...
#179 of 316 The Best English Dubbed Anime of All Time 1M VOTES If you're one of those people who only watches anime in Japanese, we don't blame you. English dubs can really ruin a series ...
#282 of 571 The Greatest Movies Of The 1980s, Ranked 527.1k VOTES Since it was one of the greatest decades for film, here's a list of the best movies of the 80s. These are the most popu...
#5 of 151 The Most Utterly Depressing Movies Ever Made 42.4k VOTES These films are depressing, but they're also remarkable. After all, what's better than depressing movies when you need to si...
#5 of 15 The 15 Most Depressing Anime Endings That Left You Dead Inside 8.5k VOTES Whether you love a good cry or hate being blind-sided with unexpectedly depressing anime endings, you've probably encountere...
#26 of 139 The Greatest Movies in World Cinema History 6.5k VOTES Hollywood may be the epicenter of the movie business, but many of the best films released each year hail from all over the w...
#2 of 16 16 Anime Scenes That Scarred You For Life 20.1k VOTES CAUTION: This list does contain some anime SPOILERS.  Anime is no stranger to pushing your emotions (and stomach)...
#1 of 30 The 25+ Darkest Anime Endings 40k VOTES While plenty of anime ends on a happy note, sometimes a series takes your heart and Gundam-blasts it int...
#8 of 15 15 Anime With 'Downer Beginnings' That Start Off Super Sad 6.5k VOTES The best anime makes its viewers feel something substantial when the series begins. While some opt for excitement, others op...
#5 of 17 People who voted for Grave of the Fireflies... People in the South are 2x more likely to vote for this 17 Anime Series That Will Make You Cry Like a Baby 60.1k VOTES While a lot of anime stays pretty lighthearted, most viewers know that it isn't always fun and games. There are many depress...
#160 of 221 People who voted for Grave of the Fireflies... People on the West Coast are 3x more likely to vote for this The Greatest World War II Movies of All Time 372.9k VOTES The best World War 2 movies remind us that perhaps no single event has had a greater impact on the future of filmmaking than...
#7 of 15 The 15 Saddest Anime Scenes Of All Time 17.6k VOTES There's nothing like a sad scene to make you emotionally invested in an anime. These emotional moments may also compel ...
#1 of 10 The Best Japanese Movies Streaming on Hulu 445 VOTES Japanese films have a rich history stemming from the kinetoscope's introduction to Japanese filmmakers in the late 1890s. Si...
#15 of 27 The Best Anime Like Wolf Children 257 VOTES Being a single parent is an incredibly difficult job, but it only gets worse when your children can turn into wolves. Wolf C...
#3 of 12 12 Anime Where the Main Character Dies 18.6k VOTES Anime is notorious for killing off main characters, much to the dismay of the supporting cast and fans alike. After all...
#14 of 22 Amazing Japanese Kids Movies You Should Watch 1.8k VOTES Sometimes big budget children's films leave a lot to be desired, but Japanese kids' films often prove to be thoughtful, in...
#3 of 29 The Best Movies About World War II Japan 1.2k VOTES Movies about World War II Japan fascinate audiences, and with good reason. This period in history is marked by drama and b...
#26 of 31 31 Movie Trailers That Made You Weep 376 VOTES No, you’re crying! Any movie trailer that makes a person do the ugly cry is brilliant advertising. Trailers are made to get ...
#15 of 15 The 15 Best Hulu Anime For Older Audiences 2.5k VOTES Hulu is a fantastic place to find a variety of programs - including anime. They have a wide selection of anime in all g...
#7 of 1,083 People who voted for Grave of the Fireflies... also upvote Fullmetal Alchemist on The Best Anime Series of All Time also upvote Cowboy Bebop on The Best Anime Series of All Time The Best Anime Movies of All Time 119.4k VOTES A list of all the best anime movies ever made, many of which are streaming on Netflix and Amazon Prime. This anime movie lis...
#26 of 46 The Best '80s Cartoon Movies 8k VOTES The 1980s brought a ton of explosive, bright, fun cartoon movies to the silver screen. Classics like The Little Mermaid and ...
#3 of 125 The Best Movies About Tragedies 7.8k VOTES A list of all the best tragedy movies ever made, many of which are streaming on Netflix and Amazon Prime. To see a more gene...
#1 of 13 The Best World War II Anime Series 2.1k VOTES List of the best World War II anime, voted on by Ranker's anime community. This may not be the most popular genre of Japanes...

Grave of the Fireflies is also found on...

List of All Animation Movies Movies Distributed by Optimum Releasing