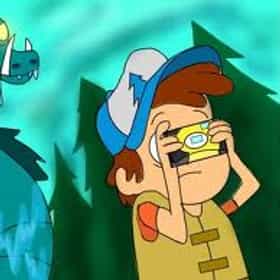 Gravity Falls is an American animated television series created by animator Alex Hirsch for Disney Channel, now on Disney XD. The series follows the adventures of Dipper Pines and his twin sister Mabel in the fictional town of Gravity Falls, Oregon, while on summer vacation. At the start of the series, twins Dipper and Mabel are sent to spend the summer with their great-uncle Stan, in the mysterious town full of unexpected situations that involve various paranormal and supernatural creatures. Grunkle Stan has the kids help him run The Mystery Shack, the tourist trap that he owns. The twins try to adapt to the weird surroundings but sense there is something strange about Gravity Falls ... more on Wikipedia

‘Gravity Falls’ Fan Theories That Will Make You Wish The Show Never Ended 1.3k votes Even when the show was still releasing episodes, there were countless Gravity Falls fan theories, some of which even turned ...
18 Surprisingly Dark Moments in Gravity Falls 3.3k votes Gravity Falls is a Disney Channel cartoon that revolves around the paranormal mysteries that happen in a small town in Orego...
Rick & Morty And Gravity Falls Are Connected, And You Can See The Proof Yourself 3.3k views Well, one show is all about visiting other universes...

Gravity Falls is ranked on...