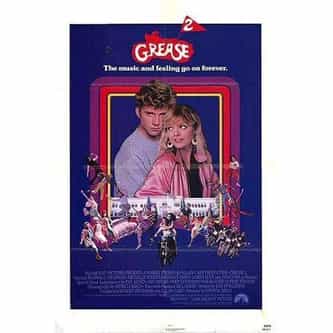 Tagline
Grease is still the word!
The Music and Feeling go on Forever

Grease 2 is a 1982 American musical film and sequel to Grease, which is based upon the musical of the same name by Jim Jacobs and Warren Casey. Grease 2 was produced by Allan Carr and Robert Stigwood, and directed and choreographed by Patricia Birch, who also choreographed the first film. It takes place two years after the original film at Rydell High School, with an almost entirely new cast, led by actors Maxwell Caulfield and Michelle Pfeiffer. ... more on Wikipedia

Grease 2 IS LISTED ON