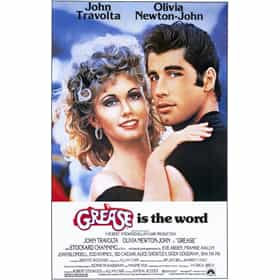 Grease is a 1978 American musical romantic comedy-drama film directed by Randal Kleiser and produced by Paramount Pictures. It is based on Warren Casey and Jim Jacobs' 1971 musical of the same name about two lovers in a 1950s high school. The film stars John Travolta, Olivia Newton-John, Stockard Channing, and Jeff Conaway. It was successful both critically and at the box office. Its soundtrack album ended 1978 as the second-best selling album of the year in the United States, behind the soundtrack of Saturday Night Fever, another film starring Travolta. A sequel, Grease 2, was released in 1982, starring Maxwell Caulfield and Michelle Pfeiffer. Only a few of the original cast members ... more on Wikipedia

This Disturbing Fan Theory Will Completely Change How You See 'Grease' 7.6k views Even among fan theories, there are clichés, and perhaps the most common fan theory is the classic, "It's all in ...
The Best Songs in Grease, Ranked by Singability 1.8k votes Calling all T-Birds and Pink Ladies, it's time to rank the best songs from Grease. Whether you're a fan of the 1971 musical ...
Which Character From 'Grease' Would You Be, According To Your Zodiac? 6.6k views Do you find yourself hopelessly devoted to astrology but wish the signs were given a "Greased Lightning" makeover?...

Grease is ranked on...

Grease is also found on...