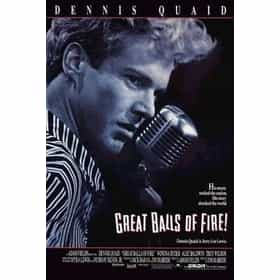 Great Balls of Fire! is a 1989 American biographical film directed by Jim McBride and starring Dennis Quaid as pioneer rock 'n' roll star Jerry Lee Lewis. Based on a biography by Myra Lewis and Murray M. Silver, Jr., the screenplay is written by McBride and Jack Baran. The film is produced by Adam Fields, with executive producers credited as Michael Grais, Mark Victor, and Art Levinson. The early career of Jerry Lee Lewis, from his rise to rock 'n' roll stardom to his controversial marriage to his 13-year-old cousin that led to his downfall, is depicted in the film. Until the scandal of the marriage depreciated his image, many had thought Lewis would supplant Elvis Presley as the ... more on Wikipedia

Great Balls of Fire! is ranked on...

#126 of 205 The Best Movies About Music 47.1k VOTES The films on this list of the best movies about music have been ranked as the best. This list features the best music movies...
#41 of 102 Movies That Turned 30 in 2019 6.4k VOTES Take a trip down memory lane with this list of movies that turned 30 in 2019. Featuring dramas, cult classics, well-made com...
#105 of 239 The Best Movies Based on True Stories 57.4k VOTES "Based on a true story" is so commonly thrown around it's practically the new "in a world where..." as f...
#4 of 14 The Most Wildly Inaccurate Biopics Of Famous Musicians And Bands 1.4k VOTES Condensing the lives of real people into a two-hour movie often forces filmmakers to carefully edit the facts. This sometime...
#13 of 33 The Best Historical Movies Released in the 1980s 685 VOTES What are the best historical movies from the 1980s? This list includes great historical movies such as Glory, Amadeus, and N...
#35 of 78 The Best Alec Baldwin Movies 2.7k VOTES Here are the best Alec Baldwin movies, ranked best to worst with movie trailers when available. With over 50 films in his ...

Great Balls of Fire! is also found on...