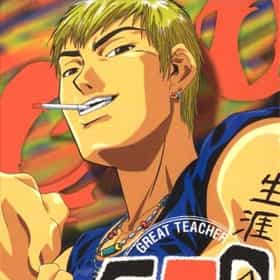 Great Teacher Onizuka, officially abbreviated as GTO, is a Japanese shōnen manga written and illustrated by Tohru Fujisawa. It was originally serialized in Weekly Shōnen Magazine from May 1997 to April 2002. The story focuses on 22-year-old ex-bōsōzoku member Eikichi Onizuka, who becomes a teacher at a private middle school, Holy Forest Academy, in Tokyo, Japan. It won the 1998 Kodansha Manga Award for shōnen and is a continuation of Tohru Fujisawa's other manga series Shonan Junai Gumi and Bad Company, both of which focus on the life of Onizuka before he becomes a teacher in Great Teacher Onizuka. Due to the popularity of the manga, several adaptations of GTO were established. These ... more on Wikipedia

Great Teacher Onizuka is ranked on...

#126 of 891 People who voted for Great Teacher Onizuka... People outside of the US are 2x more likely to vote for this People Age 30 to 49 are 2x more likely to vote for this The Best Anime Series of All Time 5.7M VOTES You love anime but what tops this list of the best anime series ever made? Top anime series include shows like Death Note, A...
#71 of 129 The Best Old School Anime From 1999 and Before 300.5k VOTES Young kids today don't know how good '80s anime and '90s anime really was. With the abundance of new anime that is available...
#75 of 80 The 30+ Best Anime for Teens 84.9k VOTES You might think that all anime is good for teens to watch, but there are some very sexual and violent series out there that ...
#52 of 209 People who voted for Great Teacher Onizuka... also upvote Samurai Champloo on The Best Anime Series of All Time The Best Grown-Up Anime of All Time 550.3k VOTES For those of you looking for anime that is a bit more mature, like seinen anime, here's a list of the best adult anime ...
#16 of 20 The 20 Greatest Opening Themes from Old School Anime 2k VOTES Get ready old school anime fans, because it's time to get nostalgic. This list compiles 20 of the greatest opening themes fr...
#25 of 62 The 50+ Greatest Manga of All Time, Ranked 5.7k VOTES With thousands of manga titles out there, and new ones being published all the time, it can be hard to figure out which seri...
#10 of 15 15 Anime Where Adults Are Completely Useless 525 VOTES Anime adults don't exactly have a great reputation - and there's a reason for that. In a lot of anime, adults don't exactly ...
#374 of 1,328 The Best Guilty Pleasure TV Shows 19.5k VOTES List of the best guilty pleasure TV shows, past and present, including sitcoms, dramas, reality shows, and game shows. These...
#9 of 15 15 Fantastic Anime About Working At A Job 3.8k VOTES Many people spend more time at work than they do in their own homes. With that in mind, if you're a working adult ...
#33 of 120 The Funniest Anime Shows Ever Made 179.2k VOTES List of the funniest anime of all time, as voted on by the Ranker anime community. Although many great animes have comedy el...
#6 of 34 The Best Anime Like Space Brothers 70 VOTES Sometimes your childhood dreams just don't come true; whether you've just lost interest or life got in the way, there are pl...
#2 of 26 The 25+ Best Anime About Delinquents 1.5k VOTES It turns out there are some great anime about delinquents, those troublemakers who may do stupid things but still mange...
#5 of 26 The Best Anime Like Trigun 393 VOTES Need some Trigun anime recommendations? It's easily one of the most classic anime ever made, so let's rank the bes...
#8 of 13 The 13 Best Anime Like Prison School 1k VOTES If you’ve been enjoying Prison School, you probably want more right? From Great Teacher Onizuka to Golden Boy, let's ta...
#10 of 13 The Best Anime Like We Never Learn: BOKUBEN 483 VOTES We Never Learn: BOKUBEN, also known as We Never Learn and Bokutachi wa Benkyou ga Dekinai is one of...
#8 of 12 The 13 Best Anime Like Mob Psycho 100 1.7k VOTES Mob Psycho 100 is a popular Studio Bones anime that follows a twelve-year-old boy named Mob Kageyama whose pr...
#10 of 13 The 13 Best Anime Like Assassination Classroom 2.1k VOTES It's not easy finding another anime like Assassination Classroom. After all, how many shows out there star a giant squid cre...