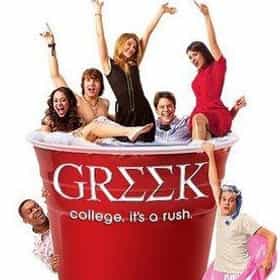 Greek is an American comedy-drama television series that ran from July 9, 2007 to March 7, 2011 on ABC Family. The series follows students of the fictitious Cyprus-Rhodes University, located in Ohio, who participate in the school's Greek system. The show's plots often take place within the confines of the fictional fraternities Kappa Tau Gamma and Omega Chi Delta, or the fictional sorority Zeta Beta Zeta. Throughout the course of the series, other non-Greek characters and situations are introduced, but they all tie into larger relationships with the Greeks. The series follows Rusty and Casey Cartwright as they endure the events surrounding the Greek system at Cyprus-Rhodes. There are ... more on Wikipedia

Greek is ranked on...

#6 of 35 What to Watch If You Love 'Friday Night Lights' 208 VOTES Friday Night Lights is a sports drama based on the book and film of the same name that garnered the love and affection ...
#79 of 135 People who voted for Greek... also upvote She's the Man on The Best Teen Romance Movies also upvote Bring It On on The Best Teen Movies of All Time The Best Teen Drama TV Shows 918.5k VOTES Ranked here are the very best teen drama shows on television, ranked from best to worst. Popular teen drama TV shows ha...
#331 of 476 The Best Television Shows of the 2000s 145.6k VOTES Some great TV shows came out of the 2000s, while some have even lived on. Here's a list of the best shows that aired from 20...
#64 of 277 The Best Hulu TV Shows 8k VOTES The absolute best shows streaming on Hulu, ranked from the most popular to the least by the Ranker community. This list has ...
#20 of 71 The Best Romantic Comedy TV Shows 69.6k VOTES The very best romantic comedy shows on television are a little bit of funny and a whole lotta love. Popular romantic comedy ...
#2 of 28 The Greatest TV Shows About College 643 VOTES College life is one of the most idealized times for many adults, as depicted in numerous college TV shows. The people who li...

Greek is also found on...