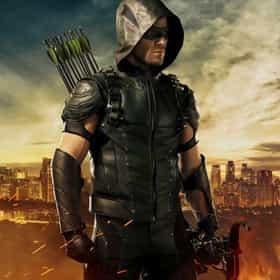 Green Arrow is a fictional superhero who appears in comic books published by DC Comics. Created by Morton Weisinger and designed by George Papp, he first appeared in More Fun Comics #73 in November 1941. His real name is Oliver Queen, a billionaire businessman and owner of Queen Industries, as well as a well-known celebrity in his locale of Star City. Sometimes shown dressed like Robin Hood, Green Arrow is an archer who uses his skills to fight crime in his home cities of Star City and Seattle, as well as alongside his fellow superheroes as a member of the Justice League. Though much less frequently used in modern stories, he also deploys a range of trick arrows with various special ... more on Wikipedia

The Best Storylines That Feature Green Arrow 146 votes The Green Arrow has long been a fan favorite character of DC Comics, and thanks to the success of The CW's series Arrow and ...

Green Arrow is ranked on...

#832 of 1,423 The Greatest TV Characters of All Time 1.2M VOTES List of TV's most memorable characters, of all time, chosen by the Ranker community. What makes a character live on in the p...
#7 of 182 People who voted for Green Arrow... also upvote X-Men Franchise on The Best Superhero Movies Ever Made also upvote Flash on The Best Comic Book Superheroes of All Time The 100+ Best DC Comics Heroes of All Time, According to Fans 523.6k VOTES DC Comics has a stable of great, iconic heroes on their roster, and while fans of Marvel would vehemently disagree – some of...
#17 of 91 The Most Hardcore Current TV Characters 291.3k VOTES The most badass current TV characters include men and women who, though they do not exist in reality, are fearless in today'...
#8 of 92 The Best Members of the Justice League and JLA 123.5k VOTES Many heroes have been a part of DC's most famous superhero team since its inception in the 60s, but who are the best members...
#14 of 105 Comic Book Characters We Want to See on Film 134.5k VOTES   Certain comic book characters definitely lend themselves to film better than others. Sometimes it's their costume...
#13 of 31 The Best Superhero Evolution on Film 42.6k VOTES As the studios keep cranking out superhero film after superhero film things change. Drastically. Whether it's technological...
#22 of 35 Cosplayers Who Stepped Right Out of the Comics 80.2k VOTES Fans across the globe migrate to San Diego each year for Comic-Con. But only the bravest of fans spend countless hours const...
#28 of 56 Current TV Characters You Would Hire 5.4k VOTES The current TV characters you'd hire are all ranked here on this list of employable fictional people. Ever watch a televis...
#45 of 72 The Greatest Fictional Characters Leading Double Lives 16.8k VOTES Are you looking for a new book or movie where the fictional character is leading a double life? Browse through this list o...
#18 of 20 The Superheroes With the Best Rogues Galleries 10.4k VOTES A hero can definitely be defined by the villains they bring to justice. Some of their villains even steal the spotlight at t...
#7 of 17 Superheroes with Children 4.3k VOTES Superheroes seem so busy, and their job is so dangerous, you'd think they'd have no time for family. Wrong! Many superheroes...
#15 of 15 The Hungriest Comic Book Characters 436 VOTES Listen, we've all been there. You're getting a little irritable, your stomach is growling, your hands are a bit sh...
#13 of 16 Funko Pops That Actually Look Like The Characters 302 VOTES When people think of Funko Pops, they think of the array of pop culture characters and real-life celebrities immortalized in...
#6 of 10 10 Comic Book Characters Who Have Turned Into Werewolves 238 VOTES In the world of comic books, anything can happen. Many stories see characters die and resurrect repeatedly, among many ...
#43 of 56 The Best Superheroes To Be For Halloween 1.7k VOTES Halloween is here, which means it's time to figure out your costume for the big night. Do you go as some current meme that...
#19 of 34 The Greatest Masked Characters 13.8k VOTES In fiction, masks are often used to disguise secret identities. These masks usually become as iconic, if not more so, than t...
The 15 Lamest Superhero Origin Stories 483.5k VIEWS Some superhero origins are just lame. Not all heroes get bitten by radioactive spiders, were the last survivor on a destroye...
The 20 Richest Comic Book Characters of All Time 783.9k VIEWS Here's a list of the richest superheroes, comic book characters and wealthiest villains of all time, ranked from richest to ...
Comic Book Characters Whose Kids Are Even Stronger Than They Are 3.9k VIEWS Superheroes in comics seem to be so perfectly "created" that they're often each seen as the most powerful ever. Th...
Every Non-Green Lantern Hero Or Villain Who Has Worn A Power Ring In The DC Universe 40.4k VIEWS If you think that the only DC characters who have worn a Lantern Ring are members of one of the color-coded Lantern Corps, y...
Top 100 Most Popular Superheroes and Villains in Comic Books 118.7k VIEWS These are the superhero (and villain) characters who have been in the most individual issues of comic books, including ...
#2 of 20 The Best Outsiders Members 84 VOTES While basically everybody is familiar with which heroes were members of the Justice League, not being quite as familiar...

Green Arrow is also found on...