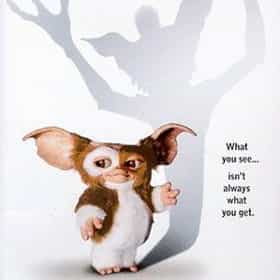 Gremlins is a 1984 American horror comedy film directed by Joe Dante, released by Warner Bros. The film is about a young man who receives a strange creature called a mogwai as a pet, which then spawns other creatures who transform into small, destructive, evil monsters. This story was continued with a sequel, Gremlins 2: The New Batch, released in 1990. Unlike the lighter sequel, the original Gremlins opts for more black comedy, which is balanced against a Christmas-time setting. Both films were the center of large merchandising campaigns. Steven Spielberg was the film's executive producer and the screenplay was written by Chris Columbus. The film stars Zach Galligan and Phoebe Cates, ... more on Wikipedia

'Gremlins' Was So Intense That It Led To The Invention Of The PG-13 Rating 3.3k views While Gremlins may be rated PG, the film was so psychologically scarring to some that it triggered the dawn of the PG-13 rat...
The Best Gremlins Movie Quotes 70 votes The best Gremlins quotes make you realize how great the movie really is, even if you haven't seen it in a while. Let's rank ...

Gremlins is ranked on...

Gremlins is also found on...