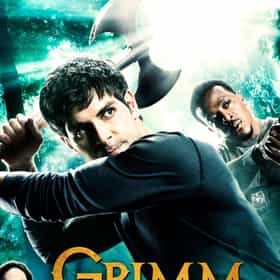 Grimm is an American police procedural fantasy television drama series. It debuted in the U.S. on NBC on October 28, 2011. The show has been described as "a cop drama—with a twist... a dark and fantastical project about a world in which characters inspired by Grimms' Fairy Tales exist", although the stories and characters inspiring the show are also drawn from other sources. Grimm ran on Fridays for the entirety of its first season. In March 2012, NBC renewed the show for a second season, which premiered on Monday, August 13, 2012, and continued on Mondays for four episodes, before returning to its original Friday timeslot on September 10. On April 19, 2013, NBC announced ... more on Wikipedia

Shocking, R-Rated Details Found In The Original Brothers Grimm Fairy Tales 11.5k votes Fairytales are supposed to end happily ever after. But fantasy aficionados the Brothers Grimm sure seemed to hate neat and ...
What To Watch If You Love 'Grimm' 238 votes If you just finished Grimm and feel like it’s left a gaping hole in your life, there’s no need to despair. We’ve compiled th...
The Best Seasons of Grimm 350 votes With five seasons under its belt, it's time we rank the best seasons of Grimm on NBC. Described as a police procedural show ...
The Best Grimm TV Quotes 260 votes Grimm redefines the traditional cop drama by adding a demonic twist. Some of the best Grimm quotes explore the wild world ...

Grimm is ranked on...

Grimm is also found on...

Keeping Up with the Kardashians episodes, is azrael a fallen angel, youtube hornblower movies, who is the best tv dad, music to pack to, best season of shameless, best nfl players of the 2010s, that 90s show, richest person in papua new guinea, best non alcoholic beer