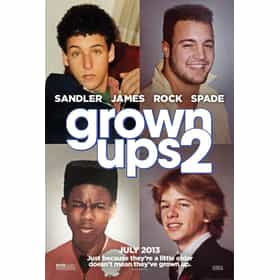 Grown Ups 2 is a 2013 American buddy comedy film directed by Dennis Dugan, and also produced by Adam Sandler, who also starred in the film. It is the sequel to the 2010 film Grown Ups. The film co-stars Kevin James, Chris Rock, David Spade, Nick Swardson, and Salma Hayek. The film is produced by Adam Sandler's production company Happy Madison and distributed by Columbia Pictures. The film was released on July 12, 2013. Although it was a box-office success, grossing roughly $247 million on an $80 million budget, it was heavily panned by critics. It was nominated nine times at the 2014 Golden Raspberry Awards. ... more on Wikipedia

Grown Ups 2 Movie Quotes 175 votes "Grown Ups 2" movie quotes bring the laughs back in the comedy sequel following a group of childhood friends who a...

#318 of 672 The Most Overrated Movies of All Time 744k VOTES The most overrated movies of all time in one list, ranked in order of how overrated they really are. Being overrated doesn't...
#103 of 233 The Worst Sequels Of All Time 77.2k VOTES The worst movie sequels from throughout film history. These are the follow-up films in a franchise or reboots that brought t...
#44 of 68 The Best Comedy Movie Sequels 6.4k VOTES The sequel can be tricky. Some great comedy films are perfect on their own, and a second installment in the franchise just l...
#7 of 44 The Funniest Comedy Movies About Family 4.8k VOTES Family can be a funny thing. The top comedy movies about families feature miscommunications, mishaps, and love that can surv...
#9 of 15 Bad Movies That Had Great Casts 8.6k VOTES We love our movie stars, but even a good cast can't always save a bad movie. Which flat-out bad movies had great casts? Audi...
#28 of 40 The Most Anticipated Summer 2013 Movies 8.5k VOTES The most anticipated summer 2013 movies are those blockbusters releasing in the warm months during 2013 that we cannot wait ...
#89 of 123 The Best Comedy Movies Of The 2010s Decade 10.8k VOTES If you're in the mood for a good laugh, you're in luck because we want you to vote for the best comedy movies of the 2010s. ...
#6 of 19 The Best Tim Meadows Movies 42 VOTES This list will determine the best Tim Meadows movies. Keep in the mind, the best Tim Meadows performances will not necessari...
The Highest Grossing Movies of 2013 10.4k VIEWS List of the highest grossing movies of 2013. Often a movie’s success is based on the amount of money it takes in at the box ...
Movie Sequels Being Released in 2013 17.3k VIEWS Movie sequels being released in 2013 include sequels to some of the biggest films ever. From action movie sequels like 'Die ...