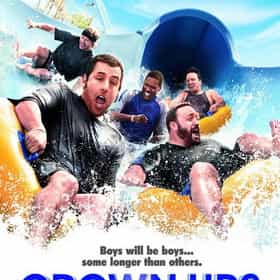 Grown Ups is a 2010 American buddy comedy film directed by Dennis Dugan, and written by Adam Sandler, who also stars in this film. Besides Sandler, the film co-stars Kevin James, Chris Rock, David Spade, and Rob Schneider. The film tells a story of five childhood friends who won their junior high school basketball championship in 1978. They reunite three decades later to mourn their coach. Meeting at a lakeside cottage they rented when they were young, the friends also re-connect with each other, their spouses, and their children. Grown Ups was produced by Sandler's production company Happy Madison Productions and was distributed by Columbia Pictures. ... more on Wikipedia

Grown Ups is ranked on...

Grown Ups is also found on...