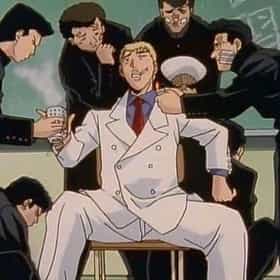 Great Teacher Onizuka, officially abbreviated as GTO, is a Japanese shōnen manga written and illustrated by Tooru Fujisawa. A 43-episode anime television series aired in Japan by Fuji Television and Animax from June 1999 to September 2000. Eikichi Onizuka is a 22-year-old ex-gang member and a virgin. While peeping up girls' skirts at a local shopping mall, Onizuka meets a girl who agrees to go out on a date with him. Onizuka's attempt to sleep with her fails when her current "boyfriend", her teacher, shows up at the love hotel they are in and asks her to return to him. Onizuka, upon seeing this display of a teacher's power over girls, decides to become a teacher himself. ... more on Wikipedia

#202 of 891 The Best Anime Series of All Time 5.7M VOTES You love anime but what tops this list of the best anime series ever made? Top anime series include shows like Death Note, A...
#255 of 318 The Best English Dubbed Anime of All Time 969.4k VOTES If you're one of those people who only watches anime in Japanese, we don't blame you. English dubs can really ruin a series ...
#216 of 1,328 The Best Guilty Pleasure TV Shows 19.5k VOTES List of the best guilty pleasure TV shows, past and present, including sitcoms, dramas, reality shows, and game shows. These...
#10 of 25 The Greatest Anime From Studio Pierrot 2.9k VOTES Studio Pierrot is a legendary anime studio that has been cranking out some of the most memorable Japanese anime si...
#2 of 20 The Best Anime Like School Rumble 380 VOTES The following list ranks the best anime that's similar to School Rumble, with the order determined by votes from anime ...
#2 of 21 The Best Delinquents Anime 935 VOTES List of the best delinquents anime, voted on by Ranker's anime community. This may not be the most popular genre of Japanese...