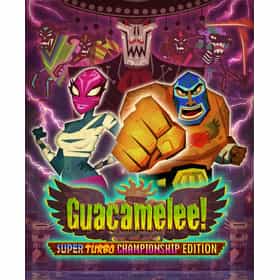 Guacamelee! is a 2013 action platforming video game developed and published by DrinkBox Studios. The game was originally released for PlayStation 3 and PlayStation Vita in April 2013, and was later ported to Microsoft Windows in August 2013, and to OS X and Linux in February 2014. An enhanced edition was released for Wii U, PlayStation 4, Xbox One, and Xbox 360 in July 2014. The game draws its inspiration from traditional Mexican culture and folklore. ... more on Wikipedia

Guacamelee! is ranked on...

#11 of 47 The Best Couch Co-Op Games To Play With Your Friends 252 VOTES In recent years, people have turned toward online co-op games. While there is something fun about playing with people around...
#4 of 21 The Best Playstation 4 Platform Games 501 VOTES Although Mighty No. 9 was a bit of a letdown, there are so many good Playstation 4 platform games that it's hard to even kno...
#8 of 66 The Best Metroidvania Video Games Ever Made 7.1k VOTES Pinning down the best Metroidvania games can be tough. See, Castlevania and Metroid became wildly popular at just about the ...
#2 of 25 The Best PlayStation 4 Metroidvania Games 338 VOTES It's such a popular genre in gaming right now, so let's rank the best PS4 metroidvania games that are currently available on...
#11 of 29 The Best PlayStation 4 Indie Games 604 VOTES Everyone loves a good indie title, so let's rank the best indie games for PlayStation 4. Many are returning games from the p...
#13 of 32 The 20+ Best PC Beat Em Up Games Steam 107 VOTES Looking for good PC beat 'em up games on Steam? Look no further, as we're ranking the best Steam beat 'em up games that you'...