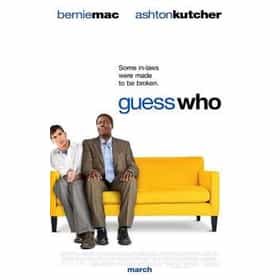 Guess Who is a 2005 American comedy film about race relations directed by Kevin Rodney Sullivan. It is a loose remake of the 1967 film Guess Who's Coming to Dinner, in the form of a romantic comedy. While the 1967 film covered interracial romance of a black man with a white woman, the 2005 film covered the topic of a white man with a black woman. The film stars Bernie Mac, Ashton Kutcher, and Zoe Saldana. The majority of the film was filmed in Cranford, New Jersey. ... more on Wikipedia

Guess Who is ranked on...

Guess Who is also found on...