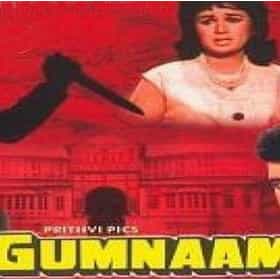 Gumnaam is a 1965 Indian suspense thriller film directed by Raja Nawathe, starring Manoj Kumar, Nanda, Pran, Helen and Mehmood. The film is an adaptation of the book And then there were none by Agatha Christie. The film became a box office hit. The music for the film was composed by Shankar-Jaikishan. The film came to wider attention in the Western World when its opening song "Jaan Pehechan Ho" was in the opening credits of Ghost World and in the 2011 commercial "The Date" for Heineken. It is sung by Bollywood legend Mohammed Rafi, although he is not the man depicted onscreen. The main dancer is Laxmi Chhaya. The group "Ted Lyons and his Cubs" playing the ... more on Wikipedia

Gumnaam is ranked on...

Gumnaam is also found on...