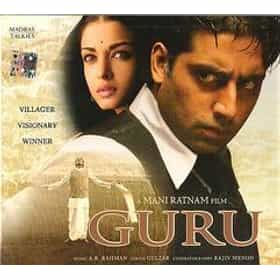 Guru is a 2007 Indian biographical film loosely based on the life of Dhirubhai Ambani, a business magnate who founded Reliance Industries. The film was co-written and directed by Mani Ratnam. It stars Abhishek Bachchan, Aishwarya Rai, R. Madhavan, Vidya Balan, Arya Babbar, Mithun Chakraborty in the leading roles. The film also has Mallika Sherawat in a guest appearance. The score and soundtrack for the film was composed by A. R. Rahman. The film was dubbed and released simultaneously in Tamil as Guru and in Telugu as Gurukanth. and in the Tamil version of the film, the lead role was dubbed by Suriya. The film was released on 12 January 2007 with its première at the Elgin Theatre ... more on Wikipedia

Guru is ranked on...

#87 of 189 The Best Bollywood Movies of All Time 95.9k VOTES   Here are the best Bollywood movies ever made, many of which are streaming on Netflix and Amazon Prime. This Bo...
#26 of 77 The Best Movies About Business 1.8k VOTES When it comes to the hustle and bustle of Wall Street, a good old rags to riches story, the fascination of private companies...
#11 of 26 The Best Movies Directed by Mani Ratnam 3.9k VOTES List of all movies directed by Mani Ratnam ranked from best to worst with photos. Films directed by Mani Ratnam are listed h...
#6 of 50 The Best Bollywood Movies of 2007 568 VOTES List of the best 2007 Bollywood movies, ranked by how many upvotes they've received by other fans of the genre. With a globa...
#1 of 13 The Best Arya Babbar Movies 84 VOTES List of the best Arya Babbar movies, ranked best to worst with movie trailers when available. Arya Babbar's highest grossing...

Guru is also found on...