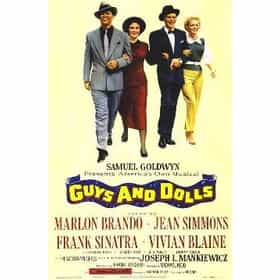 Guys and Dolls is a 1955 musical film starring Marlon Brando, Jean Simmons, Frank Sinatra and Vivian Blaine. The film was made by Samuel Goldwyn Productions and distributed by MGM. It was directed by Joseph L. Mankiewicz, who also wrote the screenplay. The film is based on the 1950 Broadway musical by composer and lyricist Frank Loesser, with a book by Jo Swerling and Abe Burrows based on "The Idyll Of Miss Sarah Brown" and "Blood Pressure", two short stories by Damon Runyon. Dances were choreographed by Michael Kidd, who had also staged the dances for the Broadway production. At Samuel Goldwyn and Joseph L. Mankiewicz's request, Frank Loesser wrote three new songs ... more on Wikipedia

lists about Guys and Dolls

Every Song in Guys and Dolls, Ranked by Singability 485 votes Hailed as a nearly perfect musical comedy after its Broadway debut, anyone who loves musical theater certainly has the Guys ...

Guys and Dolls is ranked on...

Guys and Dolls is also found on...