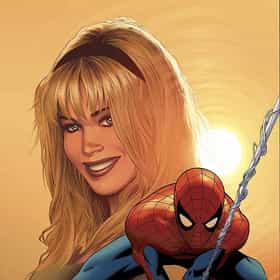 Gwendolyn Maxine "Gwen" Stacy is a fictional character who appears in American comic books published by Marvel Comics, usually as a supporting character in those featuring Spider-Man. A college student, Gwen was originally the first true love of Peter Parker before she was murdered by his nemesis Norman Osborn. Spider-Man writers and fans alike often debate whether Peter's "one true love" is Gwen Stacy, or his subsequent love interest, Mary Jane Watson, though stories written long after her death indicate that Gwen still holds a special place in his heart. The character has been portrayed by Bryce Dallas Howard in the 2007 film Spider-Man 3 and by Emma Stone as ... more on Wikipedia

Gwen Stacy is ranked on...

#77 of 190 People who voted for Gwen Stacy... also upvote Dr. Otto Octavius on The Greatest Marvel Villains & Enemies Ever The Top Marvel Comics Superheroes 1.1M VOTES This top Marvel superheroes list includes all the greatest heroes ever to be inked into Marvel comic books. Check out the&nb...
#26 of 643 People who voted for Gwen Stacy... also upvote James Bond Franchise on Every James Bond Movie, Ranked Best to Worst also upvote X-Men Franchise on The Best Superhero Movies Ever Made The Best Female Comic Book Characters 276.5k VOTES List of the best female comic book characters, be they superhero or villain. These are the women characters comic book enthu...
#32 of 125 The Best Comic Book Characters Created by Stan Lee 100k VOTES Stan "The Man" Lee is the most iconic and innovative comic creators of all time. He invented, or had a part in cre...
#19 of 399 The Most Attractive Cartoon Characters Of All Time 1M VOTES Animated vixens are nothing new, as alluring cartoons have been around almost as long as the motion picture. The female...
#10 of 44 People who voted for Gwen Stacy... also upvote Sheldon Cooper on The Greatest TV Characters of All Time Fictional Characters You'd Leave Your Woman For 56.2k VOTES She’s the woman of your dreams and she just killed a dude with a bow and arrow. She’s totally not real but if you were facin...
#86 of 102 Comic Book Characters We Want to See on Film 132.6k VOTES   Certain comic book characters definitely lend themselves to film better than others. Sometimes it's their costume...
#3 of 11 The Most Important Deaths in Comic History 2.7k VOTES Whether they were victims of an assassination, caught in the crossfire during a superhero battle, or simply died of natural ...
#1 of 20 The Many Girlfriends of Peter Parker / Spider-Man 47.1k VOTES In the comics, Peter Parker was always written as a science nerd, but that never seemed to stop him from getting female atte...
#9 of 26 The Best Female Scientists in Film 8k VOTES What's the first thing that comes to mind when you hear the word scientist? It's most likely an intelligent type wearing a w...
#12 of 35 Superheroes You Can Take Home to Mom and Dad 7k VOTES Which superhero would you bring home to impress your parents? Do DC heroes or Marvel heroes make better girlfriends and boyf...
Meet The Many Spider-People Of 'Into The Spider-Verse' 17.4k VIEWS Regular readers of Marvel Comics are already more than familiar with the litany of different versions of Spider-Man spread t...
#1 of 15 Ranking Every Spider-Woman (and Spider-Girl) in the Comics 2.4k VOTES We’re ranking every Spider-Woman and Spider-Girl in the Marvel comics universe. Along with all Spider-Woman incarnation...
Comic Book Characters That Were Criticized For 'Forced Diversity' And Became Fan Favorites Anyway 6k VIEWS Both DC and Marvel Comics have made dedicated efforts to add significant diversity to their next generation of superheroes -...
#4 of 14 Ranking Every Wolverine in the Comics 638 VOTES Hey, bub, we’re ranking every Wolverine in the Marvel comics universe. Along with all Wolverine incarnations that appea...
13 Comic Book Characters Who Are Constantly Dying 6.7k VIEWS Much like soap operas, western comic books are filled with deep-seated drama and good, old-fashioned comic book character de...
#16 of 42 All 'Marvel Ultimate Alliance 3' Characters, Ranked 6.3k VOTES Here is the entire Marvel Ultimate Alliance 3 roster, ranked by gamers everywhere. In the third installment of the series, M...
List of All A-Force Members 410 VIEWS Here is the full roster of the Marvel Comics superhero team, the A-Force. Created by writers G. Willow Wilson and Margu...
What Your Favorite ‘Into The Spider-Verse’ Spider-Person Says About You 1.5k VIEWS In late 2018, Spider-Man: Into the Spider-Verse came barreling into theaters as no superhero movie had done before...

Gwen Stacy is also found on...