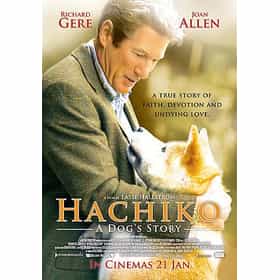 Hachi: A Dog's Tale is a 2009 drama film. Based on the true story of a faithful Akita Inu, the titular Hachikō, it is directed by Lasse Hallström, written by Stephen P. Lindsey，Kaneto Shindo and stars Richard Gere, Joan Allen and Sarah Roemer. The subject is a remake of the 1987 Japanese language film, Hachikō Monogatari, literally "The Tale of Hachiko". Hachi: A Dog's Tale premiered at the Seattle International Film Festival on June 13, 2009, and its first theatrical release was in Japan on August 8. Sony Pictures Entertainment decided to forgo a U.S. theatrical release. The film was given a UK theatrical release on March 12, 2010, courtesy of Entertainment Film ... more on Wikipedia