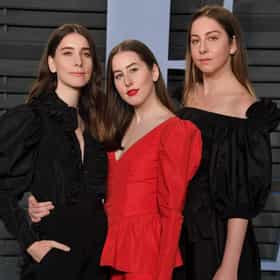 Haim is an American pop rock band from Los Angeles, California. The band consists of sisters Este, Danielle and Alana Haim, and drummer Dash Hutton. The group's pop sound on their studio work stands in contrast to the more rock-based music of their live shows. The sisters grew up in a musical family, and began playing instruments from an early age in cover bands with their parents. They began performing as Haim in 2007, but did not seriously consider a professional career for some years. Este graduated with a degree in Ethnomusicology, while Danielle became a successful touring guitarist with Jenny Lewis and The Strokes' frontman, Julian Casablancas, on his solo tours. This led to Haim ... more on Wikipedia

HAIM is ranked on...

#134 of 465 The Best Current Pop Groups/Singers 463k VOTES A list of the best current pop groups and singers who are making some of the best pop songs of 2019. The battle between...
#561 of 852 These Poetic Geniuses Wrote Your Favorite Songs of All Time 357.3k VOTES If you ask anyone who has ever tried, it's tough to write one song, nevertheless a batch to be considered a songwriter. Add ...
#137 of 225 The Best Current Female Singers 867.2k VOTES The best female singers currently performing and making some of the best pop songs of 2019 could easily be among the best of...
#178 of 570 The Most Hipster Bands 177k VOTES Since the mid-2000s, the word hipster has invaded the lexicon of pop culture and has become a term, for better or worse, syn...
#62 of 82 The Best Musical Trios Of All-Time 34k VOTES Across all types of music what is the best 3 piece band ever? Add your own favorite band...heck even country works... countr...
#16 of 100 The Best Sister Bands & Musical Groups, Ranked 1.6k VOTES Here are the greatest bands and groups featuring sisters. Many sisters are each other's best friends. They teach e...
#11 of 72 Musicians You Most Wish Would Put Out A Christmas Album 3.5k VOTES It's the most wonderful time of the year: Christmas. Nothing beats sipping hot cocoa next to the fire, jamming out to your f...
#68 of 85 Who Do You Want To See On Carpool Karaoke? 24.4k VOTES Few things are more humanizing than watching someone go off to their favorite song while driving around. Whether it's your b...
#117 of 182 The Best Modern Rock Bands/Artists 29.4k VOTES Modern rock artists list, with photos, ranked best to worst by votes. List of good modern rock bands includes a filter so yo...
#431 of 673 The Best Alternative Bands/Artists 194.9k VOTES At the end of the 1980s, at the peak of glam rock and hair metal, a new genre began to emerge from the underground. Since it...
#64 of 110 The Greatest Rock Artists Of The 2010s 1.4k VOTES Here are the best rock artists of the decade, ranked by fans everywhere. Featuring classic rock bands, talented singer-...
#41 of 52 The Best Rock Trios Of All Time 2.6k VOTES Rock fans, this list is for you. We’re ranking the best trios in rock music. Is it The Police - or are you more of a Nirvana...
#27 of 54 The Best Pop Music Trios Of All Time 570 VOTES Here are the greatest trios in pop music history. While they have changed their lineups over the years, these&nbsp...
Every Band & Musician Who Has Performed on Saturday Night Live 104.1k VIEWS Live from the main stage at 30 Rockefeller Plaza, this is a list of every band, musician, and singer who has performed on Sa...
These Women Musicians Are Sharing Their Tales Of Sexism In The Music Industry 21.1k VIEWS Female artists like Nicki Minaj and Lady Gaga may rule the charts, but that doesn't mean that they haven’t had to deal ...
#7 of 147 The Best Musicians Who Performed on SNL In The 2010s 1.5k VOTES Saturday Night Live in the 2010s found a new kind of balance. Even with many musical guests returning multiple times, the 20...
Pop Stars' Very First Tweets 10.3k VIEWS List of pop stars's first Tweets. Behold this collection of celebrity Tweets from some of the most popular musicians in the ...

HAIM is also found on...