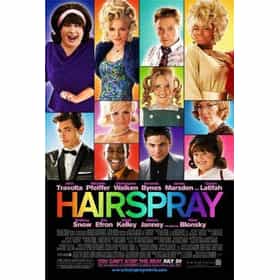 Hairspray is a 2007 American musical romantic comedy film based on the 2002 Broadway musical of the same name, which in turn was based on John Waters's 1988 comedy film of the same name. Set in 1962 Baltimore, Maryland, the film follows the "pleasantly plump" teenager Tracy Turnblad as she pursues stardom as a dancer on a local TV show and rallies against racial segregation. Adapted from both Waters' 1988 script and Thomas Meehan and Mark O'Donnell's book for the stage musical by screenwriter Leslie Dixon, the 2007 film version of Hairspray is directed and choreographed by Adam Shankman. Hairspray features songs from the Broadway musical written by Marc Shaiman and Scott ... more on Wikipedia

Every Song in Hairspray, Ranked by Singability 1k votes Run and tell that it's time to rank the best songs from Hairspray. Since its release in 1988, the John Waters film has been ...

Hairspray is ranked on...

Hairspray is also found on...