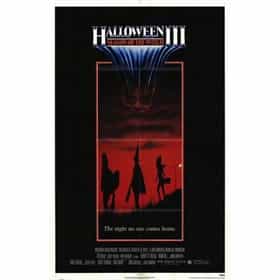 Halloween III: Season of the Witch

Halloween III: Season of the Witch is a 1982 American science fiction horror film. The film is the third installment in the Halloween franchise and notable for being the only entry in the series that does not feature the fictional character Michael Myers, nor does it include story elements from either Halloween or Halloween II. It is the first film to be written and directed by Tommy Lee Wallace. John Carpenter and Debra Hill, the creators of Halloween, returned as producers. The film stars Tom Atkins as Dr. Dan Challis, Stacey Nelkin as Ellie Grimbridge, and Dan O'Herlihy as Conal Cochran. The story focuses on an investigation by Challis and Grimbridge into the activities of Cochran, ... more on Wikipedia

lists about Halloween III: Season of the Witch

'Halloween III: Season of the Witch' Is An Over-The-Top Sci-Fi Horror Masterpiece 2.9k views Criticized by fans at the time of its release for not being part of the overall franchise continuity and dismissed for years...

Halloween III: Season of the Witch is ranked on...

#274 of 336 'Old' Movies Every Young Person Needs To Watch In Their Lifetime 1M VOTES If you're a younger millennial, you've probably heard your older friends and coworkers say things like "Hey, you g...
#421 of 571 The Greatest Movies Of The 1980s, Ranked 524.7k VOTES Since it was one of the greatest decades for film, here's a list of the best movies of the 80s. These are the most popu...
#221 of 804 People who voted for Halloween III: Season of the Witch... Men are 2x more likely to vote for this The Best Horror Movies Of All Time 1.1M VOTES Horror movies, ranked by adrenaline junkies worldwide. Anyone can vote on this CrowdRanked list, and can even add your own f...
#16 of 23 Underrated Halloween Movies You Should Watch This Year 86.1k VOTES Isn’t Halloween the best? Not only do you get to dress up and eat candy, but you don't look weird for watching spooky movies...
#9 of 11 Every Movie in the Halloween Franchise, Ranked Best to Worst 8.8k VOTES As we wait for the new Halloween movie, we're ranking all the movies in the Halloween franchise. Except for Halloween I...
#19 of 56 The Best Horror Movies That Take Place On Halloween 2.1k VOTES If you are looking for the ultimate list of Halloween horror movies, you've come to the right place. This lis...
#49 of 53 The Best Jamie Lee Curtis Movies 4.6k VOTES List of the best Jamie Lee Curtis movies, ranked best to worst with movie trailers when available. Jamie Lee Curtis's high...
#12 of 58 The Scariest Small Town Horror Movies 2k VOTES The greatest small town horror movies offer something special for people who like to be scared. In these settings, ther...
#119 of 234 The Best R-Rated Horror Movies 8.4k VOTES List of R-Rated horror movies, ranked from best to worst with movie trailers when available. This list takes the best R-Rate...
#52 of 182 The Best Slasher Movies 90.8k VOTES A list of the best slasher movies. These are some of the best slasher films ever made, but if you feel we've missed one, ple...
#9 of 85 The Best Horror Movies of 1982 2.3k VOTES List of the best 1982 horror movies, ranked by how many upvotes they've received by other fans of the genre. All types of sc...

Halloween III: Season of the Witch is also found on...