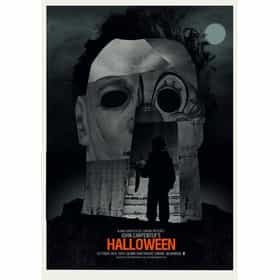 Halloween is a 1978 American independent slasher horror film directed and scored by John Carpenter, co-written with producer Debra Hill, and starring Donald Pleasence and Jamie Lee Curtis in her film debut. The film was the first installment in what has become the Halloween franchise. The plot is set in the fictional Midwestern town of Haddonfield, Illinois. Fifteen years after Halloween night in 1963, Micheal Myers escapes from a psychiatric hospital, returns home, and stalks teenager Laurie Strode and her friends. ... more on Wikipedia

Stories About Jamie Lee Curtis From Behind The Scenes Of The Original ‘Halloween’  9.1k views The masked slasher Michael Myers may be the face of the Halloween franchise, but its beating heart has always been original ...
'Halloween' Isn't Actually A Fable About The Dangers Of Teenage Intimacy 328 views

Halloween is ranked on...

Halloween is also found on...